Just added to your cart

Yes, Australia can beat its 2030 emissions target. But the Morrison government barely lifted a finger With just over a fortnight until world leaders gather in Glasgow at a make-or-break United Nations climate conference, all eyes are on the biggest climate laggards, including Australia.

Prime Minister Scott Morrison continues to claim Australia will “meet and beat” its current 2030 target of reducing emissions by 26-28% below 2005 levels. But unlike many of his international counterparts, he has so far resisted increasing the 2030 target.

In a report released today, commissioned by the Australian Conservation Foundation, our team at Climate Analytics conclude Australia will indeed beat its current 2030 target. We project Australia’s emissions are likely to be around 30-38% below 2005 levels by 2030.

Our analysis shows almost all the emissions reductions will be the result of state government policies, and will have virtually nothing to do with the federal government. It also suggests that, given the almost total absence of substantial federal climate policies to date, Australia can do a lot more.

The federal government is a strong backer of the fossil fuel industry. Shutterstock

So how did we reach these figures?

These closures could bring 2030 emissions down by 1.2- 1.5% if they are replaced by renewables and storage, as appears to be the case.

The federal government, in its 2020 projections, said renewable energy will provide just over 50% of power supply nationally by 2030. Our projections show that figure to be more like 58-65%. This is due to state government action to encourage the continued record rollout of rooftop solar on homes and increase the amount of large-scale renewables entering the market.

At the state level, NSW, Victoria, the ACT and South Australia all have strong electric vehicle policies. Our analysis shows that by 2030, electric vehicles will make up 13-18.5% of light vehicles on the road.

To date, the Morrison government has no policy to promote electric vehicles, and Australia is one of only a few countries in the OECD with no emissions standards for cars.

Trends in Australia’s land use and forestry emissions are also pointing in the right direction. But the federal government projects a reduction in the carbon stored in our vegetation and forests, known as the carbon sink, compared with 2020 levels.

The federal government also assumes a continuing high level of land clearing through to 2030, which will lead to less natural carbon storage. But our work indicates land clearing rates are unlikely to be as high as the government expects. We project by 2030 the overall sink increases above 2020 levels – again, as a result of state policies, not federal. 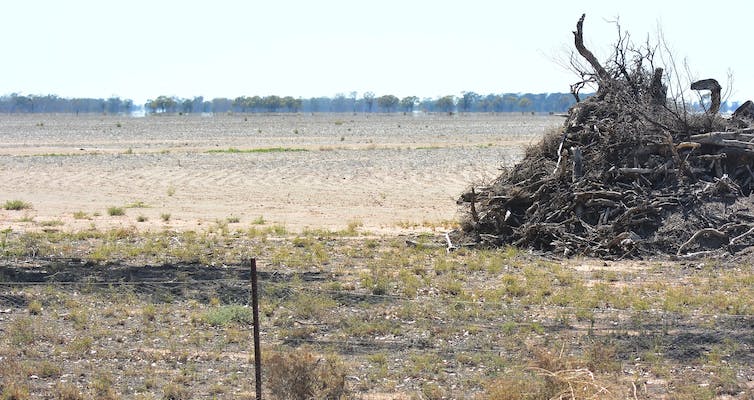 Land clearing rates are unlikely to be as high as the government expects. Shutterstock

All these reductions show state-based climate action is likely to reduce national emissions by around 28-33% by 2030, without a single move from the federal government. That’s most of the 30-38% emissions reduction we predict will occur by 2030.

The rest will come as our major trading partners tackle their domestic emissions by reducing coal and gas imports. We estimate that will lead to a reduction in Australian coal and LNG production, driving overall emissions down a further 2.6-3.4% by 2030.

The federal government’s claim it is “meeting and beating” its targets is a falsehood. It is doing little, but claiming credit from the hard work of Australia’s states and territories.

Federal policies remain firmly fixed on keeping fossil fuels in the energy mix and expanding coal and gas production. It recently approved several new coal mines and announced subsidised and expanded gas production. Gas is a fossil fuel that also needs to be phased out if we’re to have any chance of keeping warming to 1.5℃.

The Morrison government is also increasing funding for carbon capture and storage, a policy aimed at continuing the use of fossil fuels. This is despite the country’s largest such project, the Gorgon venture off Western Australia, failing to reduce and store carbon emissions at the rate originally promised.

The annual Climate Transparency analysis, released on Wednesday, shows Australia has some of the G20’s highest per capita emissions. It is the only developed country in the G20 with no price on carbon, yet ranks the fourth highest for risk of economic losses from climate impacts. 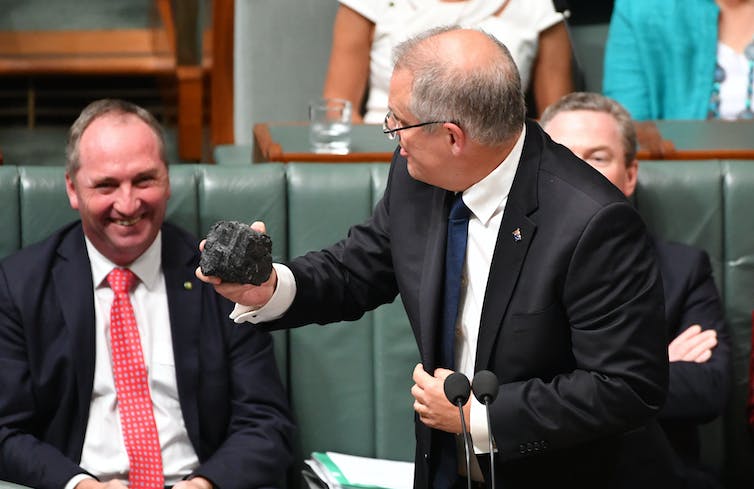 The Morrison government is increasing funding for carbon capture and storage, a policy aimed at continuing the use of fossil fuels. Mick Tsikas/AAP

It doesn’t need to be this way

Our analysis shows that if the federal government weighed in, Australia could easily halve emissions by 2030, if not reduce them to 60%.

Our report outlines three ways the government could achieve this:

Measures in these scenarios all involve:

These scenarios still do not represent an emissions pathway in line with the Paris Agreement’s 1.5℃ warming limit. We also offer a 1.5℃-compatible pathway, involving domestic emissions reduction to at least 65-75% below 2005 levels by 2030, and substantial increases in international climate finance.

Our analysis from 2020 shows the large employment benefits such measures would bring just in the energy sector – many of them delivered well before before 2030. Other research into export opportunities also shows big employment benefits.

Australia is perfectly placed to capitalise on the clean, green global transition, but time is running away as other countries chase these opportunities. To drive this transformation, the federal government must set deep emissions targets for 2030, consistent with the Paris Agreement. A 50% emissions reduction by 2030 is the bare minimum needed.